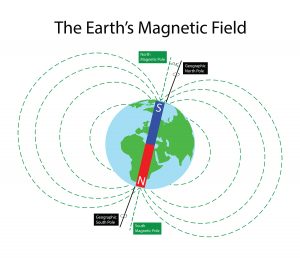 Yes It’s Earth Day. And yes, the Earth is a magnet, albeit a weak one. You see, the Earth has solid inner core at its center; surrounded by a dense, super-heated liquid outer core; a mantle of solid bulk around that; and a thin outer later, called the crust. The liquid outer core is made mostly of iron and nickel. As the Earth spins on its axis, the iron and nickel flow in currents that create a magnetic field with lines of force running between two magnetic poles at the top and bottom of the Earth.

Interesting Fact: Occasionally, molten magma pours out of the Earth’s crust as lava, then cools and becomes rock and these rocks are magnetized by the Earth’s magnetic field. Following these rocks gives a clear picture of our planet’s shifting geomagnetic poles. 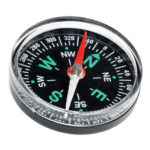 Interesting Fact: Viking sailors are said to have used compass-like tools made of lodestone and iron to determine north and south when navigating their ships in the darkness of winter. Click  for some fun tales about the first Earthlings to discover magnets. 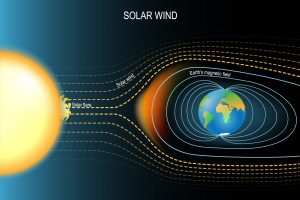 And even though the Earth’s magnetic field is weak (it’s buried roughly 1,800 miles beneath the Earth’s surface), it still serves a powerful purpose. The “magnetosphere” that surrounds the Earth prevents solar wind and harmful solar particles from reaching us on Earth, although some particles do get through, attracted to the poles where the magnetic field is strongest. There they release energy that results in auroras, the colorful phenomenon often known as Northern or Southern Lights. Our magnetic field also protects our atmosphere from erosion.

The Earth’s magnetic field has other awesome implications as well. Science points to a connection between the geomagnetic field and the sensitivity of our eyes to light. And, even more curious, scientists are investigating the correlation between crazy dreams and geomagnetic activity near the snoozer (the less activity, the crazier the dreams). 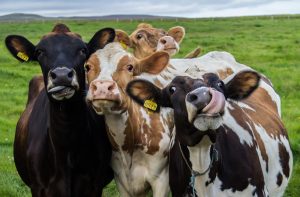